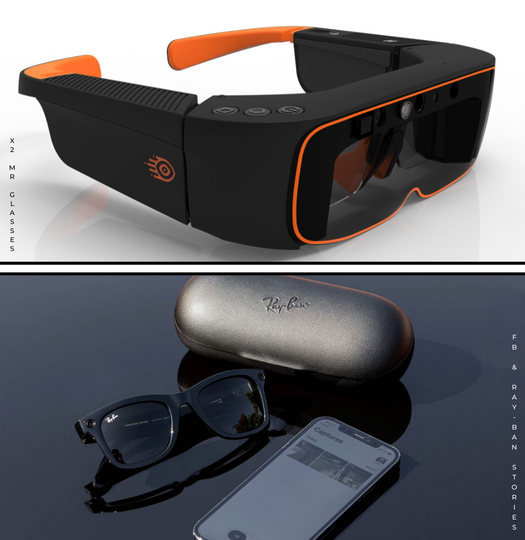 Let me introduce you to the Facebook and Ray-Ban Stories smart glasses.

First off, we would like to congratulate Facebook and Ray-Ban for taking a leap of faith with their new product launch. As an experienced augmented reality smart glasses company, ThirdEye knows how challenging the space can be. Technology companies in the smart glasses industry are up against an on-going battle of maximum hardware and software functionalities versus minimalistic form factor designs.

With that said, Facebook and Ray-Ban have finally decided to dip their toes into the water and release their first edition of smart glasses for the consumer technology market.

But are they really “smart glasses” in the practical sense of the term? Let’s find out.

For starters, you’ll notice a drastic difference in price between Facebook and Ray-Ban’s new smart glasses and other augmented reality smart glasses from companies such as ThirdEye, Google, and Microsoft. To understand these price differences, we have to start with the basics. What do the new Stories glasses have (or not have) in regards to hardware and software? We did the research for you👇

Immersive technology that you can interact with? Not quite yet.

Augmented reality displays? Not quite yet either.

The new smart glasses from Facebook and Ray-Ban do have some great bells and whistles. On the frame of the glasses, there is a touchpad to pause and start your music, or even take a video or photo. Also included in the frame are two 5-megapixel cameras - unfortunately, the camera quality isn’t quite up to par with today’s smartphones. So will it be worthwhile to use the glasses over your phone's camera? We’ll leave that decision up to you.

Additional perks of the glasses include:

But let’s talk about where the smart glasses fall a little short.

Unfortunately there are no augmented reality displays built into the frame of the smart glasses. Because of this, there is no overlay of digital information into your physical world and there is also no way to see what the cameras are seeing. You will just have to trust your natural eyesight and hope that the smart glasses accurately capture your desired photo or video.

Additionally, due to the lack of displays, there is no immersive interaction with the digital world that leading augmented and mixed reality companies currently offer - such as ThirdEye's RemoteEye and RespondEye Platforms for remote telepresence/telehealth. Without an AR display option, the glasses are limited to basic consumer use cases and will not offer the ability to integrate 3rd party software solutions.

All in all, we are excited to see Facebook and Ray-Ban enter the smart glasses industry and offer something new to the world of consumer technology. But in reality, we have seen similar product releases over the past decade including the Google Glass, Snap Inc.’s Spectacles, and even the Bose Frames.

The Stories are an affordable option for consumers that want to start off with something simple for their first pair of smart glasses. However, there is certainly a tradeoff with functionality limitations.

Facebook and Ray-Ban’s new wearable technology will be smooth and easy to use and from what we’ve seen online, are just as comfortable as wearing a normal pair of glasses. They'll feel normal, look normal, and will do what you’re buying them to do - take videos and pictures while hands-free.

If you have additional questions about the differences between ThirdEye's X2 MR Glasses and the Facebook + Ray-Bans Stories smart glasses, please feel free to reach out to us at support@thirdeyegen.com.